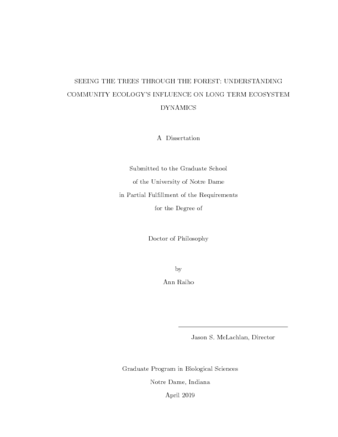 Climate change is causing vegetation redistribution and understanding redistribution is important for conservation of habitat as well as for understanding how much carbon plants can take up from the atmosphere. But, vegetation doesn’t instantly respond to climate change because plants, specifically trees, are slow growing and have strong biotic interactions between individuals, which delay vegetation’s response to changing climate. Individual tree species interact over long time scales in an ecological process called succession where, after disturbance, fast growing, short lived tree species are able to establish in high light conditions. This initial establishment is followed by increasingly shade tolerant, more slow growing species becoming dominant. Succession can take a few hundred of years to play out because many tree species are slow growing and long lived. Succession is known to the important driver of long term biomass accretion at stand scales. The compound affect of many successional processes at smaller spatial scales over millennial time scales is vegetation redistribution. We need predict vegetation redistribution to understand how much carbon terrestrial ecosystems will hold in the future and therefore how much carbon will remain in the atmosphere and cause increasing temperatures. But, current long term predictions from earth system models about the amount of terrestrial carbon that will be stored in the atmosphere are widely divergent, with predictions varying from a 800 Ptg carbon sink to a 200 Ptg carbon source by 2100. Currently, these models do not include forest demographics, known to affect plant biomass change, because finer scale processes are computationally difficult to represent at global scales. But, there has been a movement to begin to incorporate demographics into earth system models that predict long term global terrestrial carbon sequestration. Some remain unconvinced because there is a lacking of long term empirical data to support these claims. My dissertation uses paleoecological data in combination with a model for forest succession to understand the importance of forest demography over centennial and millennial time scales for predicting long term forest structure and composition.

My dissertation is four chapters. These chapters begin using tree ring data to first understand what affects predictability in succession process models and move on to demonstrate how species interactions may add up to longer term vegetation changes. My first three chapters focus on Harvard Forest, a well established research site in north central Massachusetts. Harvard Forest has collected a wide variety of data that is useful for bringing models and data together. The model I use in my research is called LINKAGES. LINKAGES was built in the 1980s to represent succession between species over centennial time scales. In my first chapter, I focus on the relationship between two species and how they influence each other differently over a 110 year period. I use three scenarios to demonstrate how species relationships may change over a 100 year time period. I found that two species, that have previously been found difficult to understand (red maple and red oak), interact on one another differently in each scenario. Specifically, my results point to having a better understanding of red oak survival in order to predict what may happen in the future at Harvard Forest. For my second chapter, I move from a specific ecological relationship between two species to determining which aspect of succession more generally affects long term predictability of forest structure and composition. I do this by sequentially adding sources of uncertainty then partitioning the forecast variance over a 50 year time period. We find that constraining initial conditions greatly decreases forecast variance. We also find that process uncertainty is an important factor to estimate and leads to increasing long term forecast variance. The stand level process of succession over centennial time scales adds up to the process of regional vegetation redistribution over millennial time scales. My third chapter moves from using tree ring data to using paleoecological data at Harvard Forest to determine mechanisms underlying a 1,000 year change in species composition. We found that an extreme event in 1258 facilitated a shift in forest demography by removing dominant species from the over-story which allowed for understory species to become more abundant. In my first three chapters I demonstrate the importance of understanding how species interact to improve future prediction. In my final and fourth chapter I use paleoecological data to show for the first time that species migration greatly affected the regional carbon cycle by estimating biomass for the last 10,000 years across 77 sites that experienced different levels of immigration of beech and hemlock, two late successional species into the Upper Midwest. These results show the long term consequence of not including forest demographics in earth system models that are used to predict the ability of forest’s to absorb carbon by 2100. Together these four chapters demonstrate the importance of including forest demographics in predictive models of the long term terrestrial carbon cycle using the forecast analysis cycle.