Basilica Alexander, Tipaza: View of remnants of arches from a side aisle 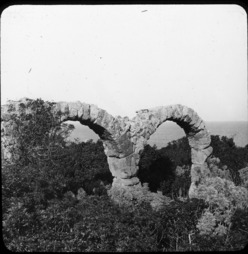 The ancient site of Tipasa (Tipaza) is adjacent to the modern village (founded 1857). The ruins have been designated a World Heritage Site by UNESCO. It became a Roman municipality under Claudius in 46 CE, built on three small hills, and flourished until the Vandal invasion of 430. Christianity was early introduced, and in the third century Tipaza was a bishop’s see. Tipasa was revived under the Byzantines. The nine-aisled basilica of Bishop Alexander on the western hill had a second apse (a “counter-apse”). These seem related to the cult of martyrs; in this basilica it was actually used for burials, and it was filled with graves.