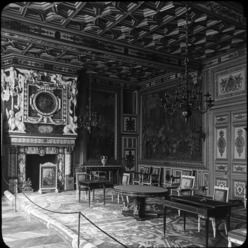 Only the chimney piece (1535-1537), with stucco work and a medallion painting (of the Marriage of Venus and Adonis after Giulio Romano) and the ceiling restored in the nineteenth century preserve the original decorations of Primaticcio (1534 -1537).