Hieronymites Monastery: Exterior detail showing the upper and lower arcade of the cloister 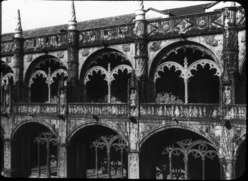 Work on the vast square cloister (55 x 55 m) of the monastery was begun by Boitac. João de Castilho completed the cloister, crowning it with an upper storey.

Established near Toledo in 1374, the Hieronymite Order soon became popular in Spain and Portugal, and in 1415 it numbered 25 houses. Prince Henry the Navigator (1394-1460) founded S Maria de Belém, a chapel of the Order of Christ, for mariners. Soon after his accession Manuel I (reigned 1495-1521) decided to build a grand monastery for the Hieronymite Order, which would continue to serve mariners as well as providing a burial place for the king. It also commemorated Vasco da Gama’s successful return from India and was built with money from the spice trade; he is buried in the church. This project drained funds from the work at Batalha, which remained unfinished. The complex includes the church, monastery, sacristy, and refectory. It is a UNESCO World Heritage Site.