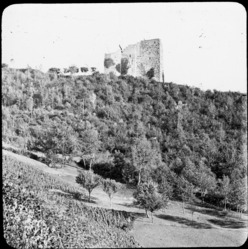 A medieval fortress located in the canton of Aargau, near the Aar River. At the time of its construction, the location was part of the Duchy of Swabia. Habsburg Castle is the originating seat of the House of Habsburg, which became one of the leading imperial and royal dynasties in Europe. Built by Werner, bishop of Strasbourg, and his brother-in-law, Count Radbot ca. 1020-1030. Habsburg Castle remained property of the House of Habsburg until 1415. Today the “large” and “small” towers of the original castle are preserved, attached to a residential building of the 13th century, while large parts of the complex lie in ruins. It is listed as a Swiss heritage site.