Chosen among Women: Mary and Fatima in Medieval Christianity and Shi'ite Islam 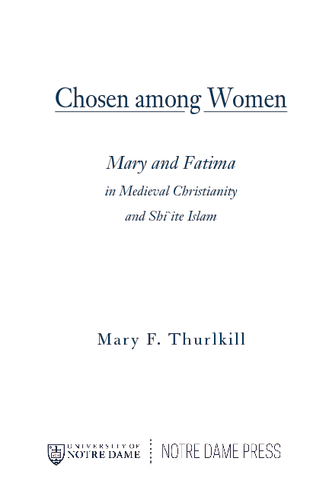 Chosen among Women: Mary and Fatima in Medieval Christianity and Shi'ite Islam combines historical analysis with the tools of gender studies and religious studies to compare the roles of the Virgin Mary in medieval Christianity with those of Fatima, daughter of the prophet Muhammad, in Shi'ite Islam. The book explores the proliferation of Marian imagery in Late Antiquity through the Church fathers and popular hagiography. It examines how Merovingian authors assimilated powerful queens and abbesses to a Marian prototype to articulate their political significance and, at the same time, censure holy women’s public charisma. Mary Thurlkill focuses as well on the importance of Fatima in the evolution of Shi'ite identity throughout the Middle East. She examines how scholars such as Muhammad Baqir al-Majlisi advertised Fatima as a symbol of the Shi'ite holy family and its glorified status in paradise, while simultaneously binding her as a mother to the domestic sphere and patriarchal authority.