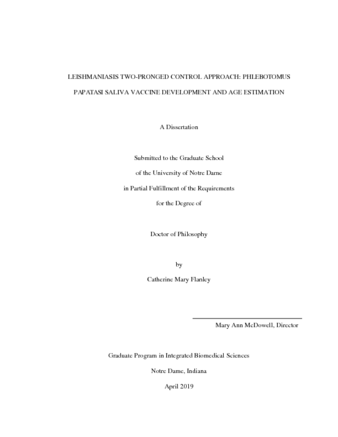 Phlebotomine sand flies are globally distributed with Old World Phlebotomus found in Europe, Africa, the Middle East and India and New World Lutzomyia inhabiting the Western hemisphere from Argentina to the United States. Females vector over 20 Leishmania parasites that cause leishmaniasis with clinical manifestations that can lead to disfiguring skin lesions or fatal disease. For oviposition, females require a blood meal. They release immunogenic proteins that facilitate feeding, modulate the host immune response, and transmit parasites. Saliva has been shown to exacerbate skin lesions in mice when co-infected with Leishmania parasites but was observed to have a protective effect when mice were pre-exposed to saliva and then challenged with parasites.

The research presented here focuses on the Old World species, Phlebotomus papatasi, that transmits Leishmania major causing cutaneous leishmaniasis. This work confirms that P. papatasi sand flies are relatively homogeneous but that localized genetic differentiation exists between populations through population genetics analysis of the cytochrome b gene. This homogeneity reaffirms the development of a vaccine using specific sand fly salivary proteins. Nine P. papatasi salivary proteins, from populations in Egypt and Jordan with unique ecotopes, were analyzed for their genetic variability and their immune response potential. Two proteins demonstrated a high degree of conservancy and were predicted to activate T-cells. The other seven proteins revealed significant genetic variation and predicted to elicit an immune response to varying degrees. PpSP12 and PpSP14 are recommended for further evaluation as vaccine candidates while we caution the use of the additional seven proteins.

While a safe, effective vaccine is important, it is not the only avenue to disrupt disease transmission. Vector management decreases contact between vectors and hosts, mainly through insecticide use. Novel control strategies are needed due to rising insecticide resistance. Researchers cannot accurately age sand fly populations making it difficult to monitor vector management. Here, near-infrared spectroscopy is validated to age-grade P. papatasi with greater than 80% accuracy when grouped into age cohorts <7 days old or ≥7 days old. Overall, this research advances the fight to combat leishmaniasis by furthering vaccine development and validating a new tool for vector management.