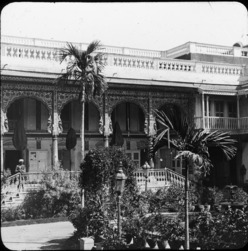 In 1724 the city once again became the headquarters of a ruling dynasty, the Asaf Shahis. These sultans, otherwise known as the Nizams of Hyderabad, became the most powerful in the Deccan. Asaf Jah began as the Mughal governor of the region (a “nabob”) before he declared his independence and established a dynasty which ruled for seven generations until 1948. The Chaumhalla Palace complex is made up of four palaces: the Afzal Mahal, Mahtab Mahal, Tahniyat Mahal and Aftab Mahal, all arranged around a central courtyard garden (the southern courtyard) with a marble cistern in the centre. The Chaumhalla Palace was commenced in 1750 with later additions by successive Nizams. European-style architecture was introduced in Hyderabad during the 18th century. The southern Courtyard is older and neoclassical; the northern courtyard has Mughal and Persian influences.