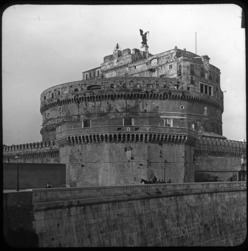 The Mausoleum of Hadrian, usually known as the Castel Sant'Angelo, is a towering cylindrical building in Rome, initially commissioned (and actually designed) by the Roman Emperor Hadrian as a mausoleum for himself and his family. The building was later used as a fortress and castle, and is now a museum. Originally the mausoleum was a decorated cylinder, with a garden top and golden quadriga. Hadrian’s ashes were placed here a year after his death in Baiae in 138. Following this, the remains of succeeding emperors were also placed here, the last recorded deposition being Caracalla in 217. Much of the tomb contents and decoration has been lost since the building’s conversion into a military fortress in 401 and inclusion by Flavius Augustus Honorius in the Aurelian Walls. Legend holds that the Archangel Michael appeared atop the mausoleum, sheathing his sword as a sign of the end of the plague of 590, thus lending the castle its present name.