Essays on Economics of High-Skill Immigration 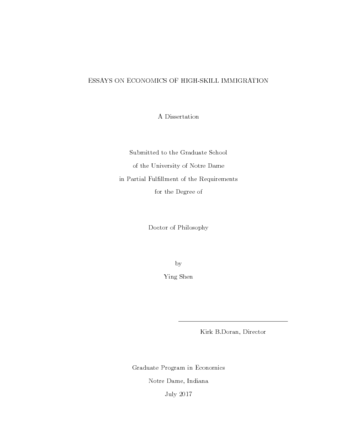 The second chapter uses the opening up of China in 1978 to estimate the causal effect of this flow on the productivity of their professors in mathematics departments across the United States. Our identification strategy relies on both the suddenness of the opening of China and on a key feature of scientific production: intra-ethnic collaboration. The new Chinese students were more likely to be mentored by American professors with Chinese heritage. The increased access that the Chinese-American advisors had to a new pool of considerable talent led to a substantial increase in their productivity. Despite these sizable intra-ethnic knowledge spillovers, comparable non-Chinese advisors experienced a decline in the number of students they mentored and a concurrent decline in their research productivity. In fact, the productivity gains accruing to Chinese-American advisors were almost exactly offset by the losses suffered by the non-Chinese advisors. Finally, the evidence does not support the conjecture that the efficiency gains from the supply shock will be more evident in the next generation, as the Chinese students begin to contribute to mathematical knowledge. The rate of publication and the quality of the output of the Chinese students is comparable to that of the American students in their cohort.