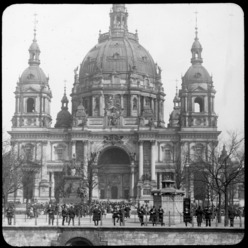 Originally Roman Catholic, from 1539 Protestant. The first church on the site was begun 1451. The Berlin Cathedral had never been a cathedral in the actual sense of that term since it has never been the seat of a bishop; it was a collegiate church. After dismantling the movable interior (altar, paintings, sarcophagae), Boumann’s building (1750) was demolished in 1893 and Julius and Otto Raschdorff, father and son, built the present Supreme Parish and Collegiate Church in exuberant forms of high Neo-Renaissance style. The domes were rebuilt in a simplified form after damage in WWII and the interior rebuilt.