Perugia Cathedral: View of nave looking towards apse and altar 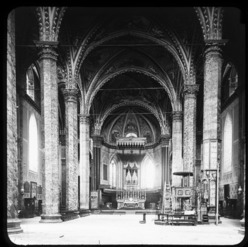 Unlike most cathedrals, the cathedral of Perugia has its flank [side] on the city’s main square, facing the Fontana Maggiore and the Palazzo dei Priori. This side has the Loggia di Braccio commissioned by Braccio da Montone (1423), an early Renaissance structure attributed to Fioravante Fioravanti from Bologna. The main façade faces the smaller Piazza Dante and has a baroque portal designed by Pietro Carattoli in 1729. The sturdy campanile was constructed in 1606-1612.