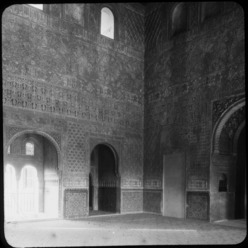 The Salón de los Embajadores (Hall of the Ambassadors) is the largest in the Alhambra and occupies all the Torre de Comares. It is a square room, the sides being 12 m (37 ft) in length, while the centre of the dome is 23 m (75 ft) high. This was the grand reception room, and the throne of the sultan was placed opposite the entrance. It was in this setting that Christopher Columbus received Isabel and Ferdinand’s support to sail to the New World. The tilework is extensive.