We’re the Real Activists: Repression and the Dissident Republican Identity 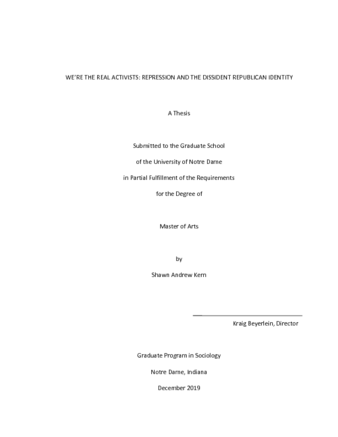 Social movements literature views repression as a barrier to movement mobilization and success. While it is acknowledged that repression can energize activism short-term, we still don’t quite know how mobilization be sustained by unsuccessful movements over decades. In this paper, data assembled from participant observation and interviews with key informants from a social movement organization in Northern Ireland demonstrate how repression affects the everyday lives of activists. Findings indicate that activist identities are made salient both by acts of repression and a consistently looming threat of repression. Repression invigorates identity but drains scarce movement resources. To make up for resource loss, movements enact protests and ceremonies to recoup. This paper contributes a process of identity, repression, and resources that sustains activist identity and movement participation in the long-term without movement success, hinting that movements can be reliant upon state repression.