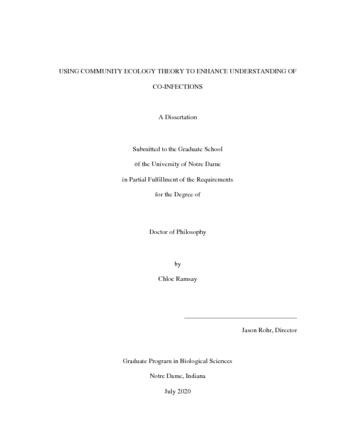 Co-infections, infections with more than one parasite species at a time, are ubiquitous in nature. Co-infecting parasites have the potential to interact with each other and the host and affect disease progression relative to single infections. Community ecology theory predicts that the environment, the density of interacting species, the timing of their arrival, and indirect interactions between species mediated by a third species can alter the outcomes of their interactions. If these theories in community ecology are applicable to co-infections in hosts, disease biologists might be able to apply them to more reliably predict the outcome of co-infections. To test this hypothesis, I studied amphibians because they are the most rapidly declining group of vertebrates, many of their declines are due to disease, and they frequently experience co-infections. In this dissertation research, I exposed amphibians to three parasites, a fungus (Bactrachochytrium dendrobatidis, Bd), a virus (Ranavirus), and a macroparasite (either Echinostoma trivolvis or Aplectana hamatospicula), either alone or in two- or three-way combinations and then tracked disease progression. My four experiments tested how the outcomes of co-infections are affected by i) the environment in which the co-infection occurs (i.e. host species), ii) initial parasite densities, iii) time gaps between co-infecting parasites, and iv) indirect interactions mediated by variation in host immunocompetence across amphibian life stages.

In my first chapter, co-infections increased microparasite loads and decreased macroparasite loads, but this only occurred with some parasite pairings in some host species. Co-infections decreased host development compared to single infections and host survival was driven by differences in host susceptibility to parasites. In my second chapter, all co-infection pairings were significantly impacted by host density, but the directionality depended on the co-infections. Also, the effects of parasite density on co-infections were always strong in one direction and weak in the other. In my third chapter, the timing of parasite co-infections affects co-infection outcomes, in some but not all cases. In my fourth chapter, post-metamorphic frogs had significantly higher immune functioning than tadpole or metamorphic life stages. Although co-infecting parasites did not facilitate one another in life stages when immune functioning was high, we did find that changes in immunity and life stage altered host response to parasites. Metamorphic frogs were less resistant and tolerant of Bd infections than the other life stages. Overall, the community ecology theories that I tested can help inform co-infections, but individual host differences in susceptibility, life stage, and the identity of the co-infecting parasites need to be taken into account when predicting how co-infections will affect host health in amphibians and other hosts.