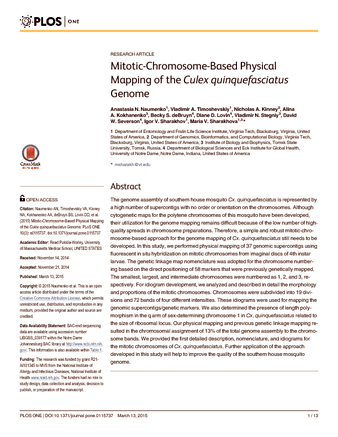 The genome assembly of southern house mosquito Cx. quinquefasciatus is represented by a high number of supercontigs with no order or orientation on the chromosomes. Although cytogenetic maps for the polytene chromosomes of this mosquito have been developed, their utilization for the genome mapping remains difficult because of the low number of high-quality spreads in chromosome preparations. Therefore, a simple and robust mitotic-chromosome-based approach for the genome mapping of Cx. quinquefasciatus still needs to be developed. In this study, we performed physical mapping of 37 genomic supercontigs using fluorescent in situ hybridization on mitotic chromosomes from imaginal discs of 4th instar larvae. The genetic linkage map nomenclature was adopted for the chromosome numbering based on the direct positioning of 58 markers that were previously genetically mapped. The smallest, largest, and intermediate chromosomes were numbered as 1, 2, and 3, respectively. For idiogram development, we analyzed and described in detail the morphology and proportions of the mitotic chromosomes. Chromosomes were subdivided into 19 divisions and 72 bands of four different intensities. These idiograms were used for mapping the genomic supercontigs/genetic markers. We also determined the presence of length polymorphism in the q arm of sex-determining chromosome 1 in Cx. quinquefasciatus related to the size of ribosomal locus. Our physical mapping and previous genetic linkage mapping resulted in the chromosomal assignment of 13% of the total genome assembly to the chromosome bands. We provided the first detailed description, nomenclature, and idiograms for the mitotic chromosomes of Cx. quinquefasciatus. Further application of the approach developed in this study will help to improve the quality of the southern house mosquito genome.