Kapaleeshwarar Temple: Approach to the temple with entrance gate and gopuram 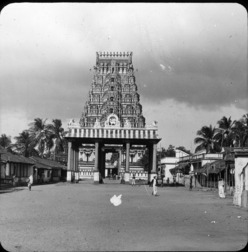 A temple of Shiva located in Mylapore, a suburb of Chennai (Madras). The architecture of the temple appears to be 300-400 years old. An earlier temple (referenced in hymns) may have been built in the 7th century CE by the ruling Pallavas on the shore at the location of the current St. Thomas Church but was destroyed by the Portuguese, and the current temple (which is 1-1.5 km from the shore) was built by the Vijayanagar kings during the 16th century. It is of typical Dravidian architectural style, with the gopuram overpowering the street on which the temple sits.