Ponte Sant'Angelo: The entry to the bridge with later Baroque sculpture; figure on right is St. Peter; left is St. Paul 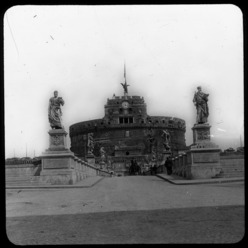 In 1535, Pope Clement VII allocated the toll income of the bridge to erecting the statues of the apostles saint Peter and Saint Paul.

The famous Ponte Sant'Angelo (pedestrians only), the ancient Pons Aelius or Pons Adrianus, was built by Emperor Hadrian in 134 AD as a fitting approach from the Campus Martius to his mausoleum, known since the Middle Ages as the Castel Sant'Angelo. Although the Roman bridge was decorated with statues, it was transformed by Gian Lorenzo Bernini when he designed the ten statues on the balustrade of angels holding the symbols of the Passion. The three central arches are part of the original structure; the end arches were restored and enlarged in 1892-1894 during the construction of the Lungotevere embankments.