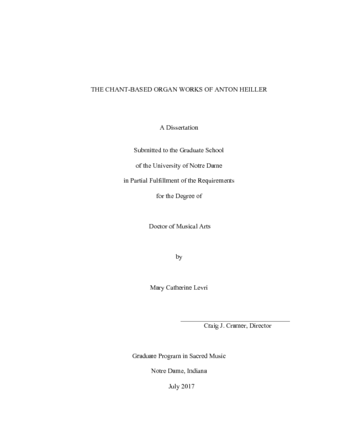 Anton Heiller (1923-1979) was a Viennese composer, organist, and conductor who was perhaps best known as a teacher and interpreter of Bach. He had a great love for church music and was deeply interested in the composition of worthy contemporary music for the Church. For the first four decades of his life, Heiller worked in an environment in which Tra le sollecitudini, Pope Pius X’s declaration on sacred music, was the gold standard for composers of modern sacred music for the Catholic Church. In this document, Pius X referred to Gregorian chant as the “supreme model” of sacred music and encouraged composers to imitate the “movement, inspiration, and savor” of the Gregorian form. Heiller not only used Gregorian chant as a basis for some of his choral works, but he also used Gregorian chant as the basis for a number of his organ works as well.

This dissertation examines the six Gregorian chant-based organ works of Anton Heiller in light of his musical influences, his philosophy of sacred music, and his ownsentiments as a Catholic believer. I propose that in order to understand the methods at work in Heiller’s chant-based organ compositions, it is essential to understand three dimensions of Heiller’s musical character: one must understand Heiller as a liturgical organist, Heiller as a Bach interpreter, and Heiller as a Catholic. This threefold perspective illuminates the musical, liturgical, and theological characteristics of Heiller’s chant-based organ works, and it also shows Heiller to be a composer who was capable of treating Gregorian melodies with an array of musical languages from the sacred music tradition while incorporating them into a modern idiom that was entirely his own.