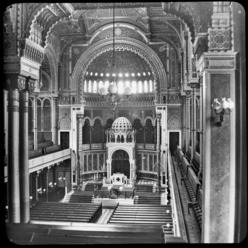 Built as the main synagogue of the Berlin Jewish community, on Oranienburger Strasse. Because of its splendid eastern Moorish style and resemblance to the Alhambra, it is an important architectural monument of the second half of the 19th century in Berlin. Following Knoblauch’s illness, Friedrich August Stüler took responsibility for the majority of its construction as well as for its interior design. It was inaugurated in the presence of Count Otto von Bismarck in 1866. It was badly damaged prior to and during World War II and subsequently much was demolished; the present building on the site is a reconstruction of the ruined street frontage with its entrance, dome and towers, and only a few rooms behind. The interior main prayer hall has not been reconstructed.