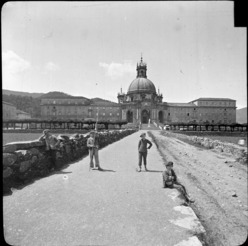 Sanctuary complex at the birthplace of Ignatius loyola near Azpeitia, in Basque country. The Loyolas’ manor house (1387-1405), now known as the Santa Casa, is a relatively simple building, 16 m square, and contains the chapel of the Conversion and that of the Immaculate Conception. In 1681 Mariana of Austria, widow of Philip IV, bought the house and gave it to the Jesuits, and in the same year she commissioned Carlo Fontana to design a college and church for the site. Construction began in 1689, but the church was not consecrated until 1738, and the ensemble was not completed until 1888. The complex is in the form of a large rectangle, with the circular church at centre front. Its dome is 21 m in diameter, with its keystone at a height of 56 m.