The Egyptian Connection: Egyptian Elements in the Liturgy of Jerusalem 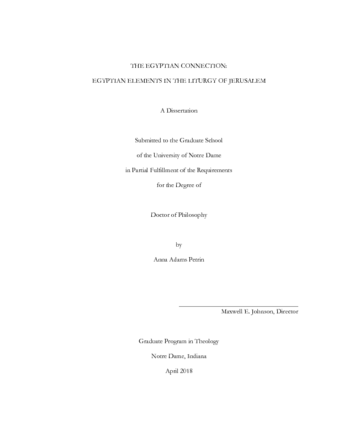 This dissertation addresses a longstanding question in the scholarship on early Christian liturgy: namely, were the earliest-known liturgical rites of Jerusalem influenced by the Egyptian liturgical tradition? This question is answered in the affirmative on the basis of a detailed analysis of the baptismal and eucharistic rites of fourth-century Jerusalem.

Chapter one explores the general relationship between Egypt and Jerusalem, and explains the comparative method of liturgical studies that is used in the rest of the dissertation. Chapter two provides an overview of three key strands of liturgical scholarship pertinent to the question of Egyptian influence on the liturgy of Jerusalem. Chapter three offers a thorough examination of the Hagiopolite baptismal rite (as described in the Mystagogical Catecheses traditionally ascribed to Cyril of Jerusalem), and it reveals numerous parallels between the early baptismal liturgy of Jerusalem and the early Egyptian baptismal tradition. Chapter four provides a similar investigation of the Hagiopolite eucharistic rite, demonstrating that significant parallels can also be found between the early eucharistic liturgy of Jersualem and the early Egyptian anaphoral tradition. Chapter five offers a brief conclusion to the dissertation as a whole.