Basilica of Saint Salsa, Tipaza: Overall view, of ruins of the basilica and graveyard 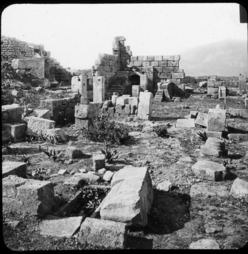 The ancient site of Tipasa (Tipaza) is adjacent to the modern village (founded 1857). The ruins have been designated a World Heritage Site by UNESCO. It became a Roman municipality under Claudius in 46 CE, built on three small hills, and flourished until the Vandal invasion of 430. Christianity was early introduced, and in the third century Tipaza was a bishop’s see. Tipasa was revived under the Byzantines. The three basilicas (churches) are surrounded by cemeteries, which are full of coffins, all of stone and covered with mosaics. The basilica of St. Salsa, which has been excavated by Stéphane Gsell (1864-1932), consists of a nave and two aisles, and still contains a mosaic. Salsa’s martyrdom took place in the 4th century.