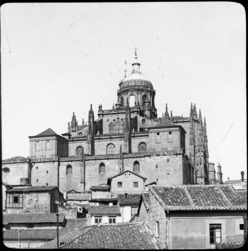 Huddled against the Gothic cathedral, the Romanesque church dedicated to the Virgin has been known as the ‘Catedral Vieja’ (the Old Cathedral) since the 16th century. A first, modest building was erected when the city was repopulated after the Christian Reconquest in 1102, but work started on the present church in the mid-12th century. From the beginning of the 13th century and throughout the 14th, many sculpted and painted tombs were placed in the south transept and the apses, as well as in the Capilla de S Martín, built in the lower part of the bell-tower.