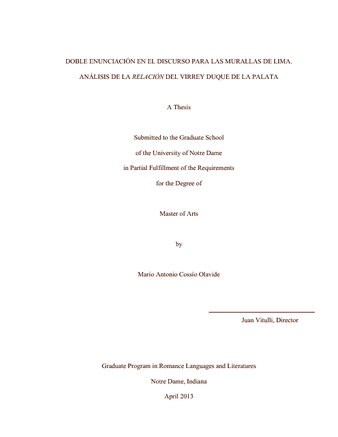 This thesis presents an analysis on sections of the Relación del Estado del Perú (1689) related to the construction of the city-walls around the capital city of the Viceroyalty, Lima. This document was written by the Peruvian Viceroy Melchor de Navarra y Rocafull to the King of Spain as a report of the actions undertaken during his government. My main task is to determine the rhetorical devices used for presenting the genesis, negotiation and construction process of the walls, as given by the functionary to the King. In the viceregal description, I will identify techniques utilized for auto representation of his figure and the ways of portrayal of the criollo population within the city. Both, Viceroy and citizens, enact a complicated negotiation process that defines a purpose for the enterprise that goes beyond its usage as a protective barrier. For this they use discursive constructions inherited from medieval rhetoric appellations of the ars dictaminis. This view of the complicated politics within the project will prove key to understand the two proposed barriers that were contained within the physical wall. On the side of the Viceroy, as a method of affirming the power of the control exercised by the bureaucracy installed in the core of the city that he presides. From the criollo neighbors is a symbolic construction that helps to the nascent efforts of erecting a local identity based on the geographical space limited by the walls.