Temple of Horus at Edfu: View, looking out to the courtyard from within the hypostyle hall 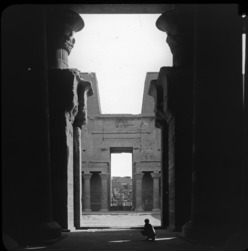 Edfu [ancient Egyptian, Behdet or Djeba; Greek, Apollinopolis; now Idfu] is the site of a temple dedicated to Horus begun by Ptolemy III Euergetes 237 BCE. The Temple of Horus, the most completely preserved of all Egyptian temples, dates mainly to the Ptolemaic period. Horus of Behdet was a divine metaphor for the living king who, having vanquished the enemy, ruled as the victorious winged sun-disc. It was therefore especially appropriate and expedient for the Greek rulers of the Ptolemaic period to venerate the victorious Egyptian divine king Horus, perhaps to reinforce their own kingship and to draw the human parallel that they had liberated Egypt from the Persian yoke.