Uxmal: Nunnery Quadrangle, facade of one of four structures facing a courtyard 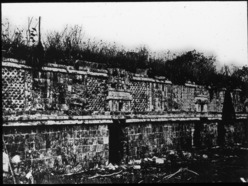 The Nunnery Quadrangle, which lies immediately west of the Temple of the Magician, consists of four range structures or multi-roomed buildings. These are renowned for the mosaic friezes on the upper sections of their façades, which have naturalistic and geometric motifs and Chac masks.

Pre-Columbian Maya site in the Puuc region of the Northern Maya Lowlands of Yucatán, Mexico. It flourished c. AD 800-c. 1000, at the end of the Late Classic period (c. AD 600-c. 900) and the beginning of the Early Post-Classic period (c. AD 900-c. 1200), but was also occupied earlier. Among the best-known structures, the names of which are all post-Spanish Conquest attributions, are the Palace (or House) of the Governor, the Temple (or Pyramid) of the Magician (El Adivino) and the Nunnery Quadrangle. The beautiful proportions and design of the Palace of the Governor have long been admired. According to Harry Pollock (1980, p. 242), this ‘magnificent building is thought by many to be the finest example of pre-Columbian architecture in the Americas’. The palace, a multi-roomed, rectangular building (c. 100 m long) with a symmetrical layout, sits on a large artificial platform. Puuc style has emphasis on decorated walls above the medial mouldings or cornices, repetitive stone mosaic decorations with stylized geometric or naturalistic designs, stone mosaic masks above doorways, decorated roof-combs and carefully cut stone veneer masonry.