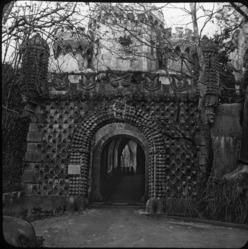 Bristles with decorative forms, and coats of arms in a mix of revival styles including Gothic, Manueline and Mudéjar forms.

It is a national monument and constitutes one of the major expressions of 19th century Romanticism in the world. The palace is a UNESCO World Heritage Site. The site began as a small shrine and later monastery, built 1493. From 1839 Ferdinand II and Wilhelm Ludwig Eschwege built the Palácio da Pena in a Romantic style, incorporating the remains of the Hieronymite monastery. It is magnificently set on a peak surrounded by the forested Pena Park and incorporates a variety of architectural styles and references to famous Portuguese buildings. The restoration of the Manueline style monastery led to the revival of Gothic, Manueline and Mudéjar forms.