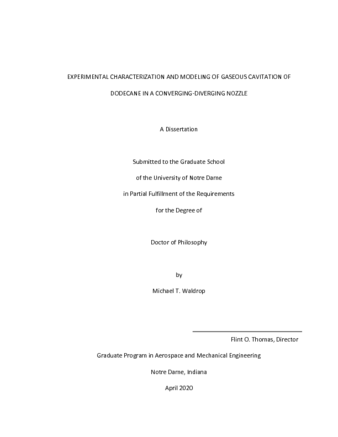 In this work, gaseous cavitation of JP-8 aviation fuel is examined through aerated cavitation of dodecane, the primary component of JP-8 by weight.Small air bubbles injected at the inlet of a converging-diverging nozzle act as inception sites for cavitation in the bulk as the fluid traverses the nozzle throat and diverging section.The flow is documented using high speed video, static pressure sensors, unsteady pressure transducers and a volumetric flow rate meter.In high speed video the injected bubbles are shown to break apart into cavitation clouds of smaller bubbles which then collapse catastrophically and emit propagating compression waves (also referred to as shock waves in cavitation literature). This collapse process is a significant source of the cavitation damage which is known to occur in piston pumps often used in aircraft fuel systems.The mechanism by which it occurs in a jet fuel surrogate is herein documented and fully described for the first time using a combination of high speed imagery, derivative images (which utilize changes in pixel saturation between subsequent images) and time resolved void fraction measurements.Key aspects of the cloud collapse process, namely the spatial range over which it occurs, are shown to coincide with notable features of streamwise static pressure distributions obtained for various combinations of inlet void fraction and nozzle back pressure ratio.The upstream bound of the cloud collapse process, or the streamwise location where the cloud has its highest void fraction, is shown to coincide with the lowest pressure in the static pressure distribution.The downstream bound, where cloud collapse has completed and a propagating compression wave (shock) is emitted, is shown to lie where the static pressure distribution first rises to a value near the nozzle back pressure (within 2% of inlet pressure).The primary cloud collapse location, the point in the nozzle divergence where cloud void fraction reduces most between subsequent high speed images and where cavitation damage is most likely to occur, is also documented for each of these cases.The properties of the emitted shock waves (compression waves) are also studied through a combination of derivative images, instantaneous void fraction distributions and unsteady pressure measurements.These reveal that shocks are emitted at integer multiples of the average time between bubble injections at the nozzle inlet and that a typical shock’s magnitude (pressure jump across the propagating disturbance) reduces dramatically as it travels downstream. This work also describes two proposed corrections to the Barotropic Cavitation Model as it applies to gaseous cavitation in choked flows through converging-diverging nozzles. The corrections are compared for accuracy to experimental pressure and void fraction measurements in a CD nozzle for both natural and aerated cavitation of several fluids (dodecane, water, JP-8). The first correction is shown to greatly improve prediction accuracy for pressure distribution and several of its features are shown to predict key aspects of aerated dodecane cavitation in a CD nozzle.These are the spatial bounds of the cloud collapse region and the primary cloud collapse location.This is especially significant since the majority of cavitation damage is likely to occur in this range, particularly at the primary collapse location.The second correction provides a significant improvement in the spatial range of accurate void fraction prediction over the uncorrected model and provides a second method for predicting primary collapse location.The improved predictions resulting from these corrections can be obtained for any choked, isothermal, cavitating (gaseous) flow through a converging-diverging nozzle of known cross-sectional area distribution. Known nozzle inlet pressure, known nozzle outlet pressure and a measurement of throat outlet pressure are the only requirements for an accurate prediction for the full length of the nozzle.The proposed corrections transform the Barotropic Cavitation Model into a useful scientific and engineering design tool for cavitating flows in converging-diverging nozzles.