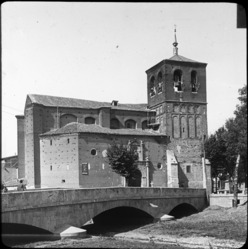 The church was built beside the wall gate of the old town, opposite the original city hall, which no longer exists. The oldest parts are Mudéjar-Gothic style; but was renovated several times. The present building dates from the 16th century, with alterations in the 18th century. It has a rectangular plan with a wide nave and another lateral aisle and an attached bell tower. The interior is baroque with two retables; the high altarpiece by Leonardo Carrión and a baroque altarpiece from the 18th century, decorated with a multitude of tiny mirrors. It is also noted for its Baroque 18th century organ.