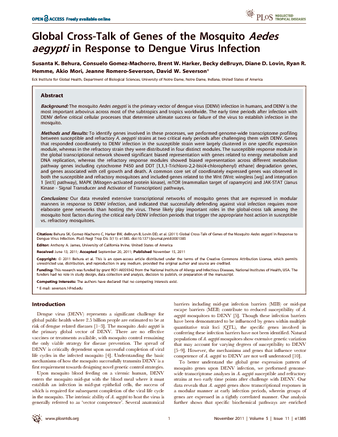 Dengue virus is primarily transmitted by Aedes aegypti mosquitoes. Control of the vector mosquito is the major practice to prevent dengue. However, it is not well known how the virus can infect some mosquito strains but fail to do so with other refractory strains. To address that question, we conducted whole genome microarray based gene expression studies between susceptible and refractory strains of A. aegypti to identify gene expression patterns following challenge with dengue virus. Our analysis of the early infection periods reveals that a large number of genes are involved in a highly coordinated manner either to host or defend against the virus. Genes responding to dengue infection were clustered in seven expression modules. Genes associated with susceptibility to infection were largely clustered in one expression module, while those associated with refractoriness were distributed in four distinct modules. A common core set of genes expressed in both susceptible and refractory individuals were clustered in two expression modules. We identified genes and specific pathways that potentially regulate compatible or non-compatible interactions between dengue virus and the mosquito, most notably energy metabolism and DNA replication in the susceptible response in contrast to cell growth and death in the refractory response.