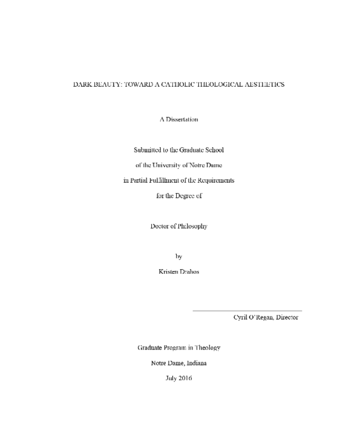 This study opens a discussion of a particular differentiation of theological aesthetics in Catholic thought that arises in the twentieth century in the work of Hans Urs von Balthasar and Erich Przywara. I argue that their accounts do not present a singular vision, but rather include a distinct aesthetics belonging to the Christocentric dimensions and trajectories carved out by Jesus’ death on the cross. While much scholarly work has been done on both thinkers’ projects, little attention has been paid to what I call the “dark beauty” of the cross. This project traces the way Balthasar and Przywara see Christ’s death as a transfigured moment for the classical rendition of beauty as form and splendor. The study spends time developing Balthasar and Przywara as theologians rooted in Scripture and the richness of the Christian tradition, but it also considers the ways that their use of the Johannine writings, the book of Revelation, and developments in Augustine, Pseudo-Dionysius, Bonaventure, and the Carmelites reveal a distinct and permanent cruciform aesthetic calibration. This dissertation offers a full consideration of dark beauty’s own scope, proposing that the distinct contributions of Balthasar and Przywara provide the two foundational poles of its expression.

The dissertation also deeply considers the applications of dark beauty for Catholic thought. An overarching concern of the work is the argument that dark beauty acts as a critical part of theology’s response to the philosophical sublime. The project details the particular challenges of three versions of the sublime in postmodern discourse– the historical, the historicist, and the messianic – for theological aesthetics. It then shows how Balthasar’s and Przywara’s dark beauty refuses the sublime’s aesthetic erasure, while at the same time providing an account of beauty able to accommodate many of the negatively-inflected contours of its rivals without losing the heart of Christian revelation. What we gain from this study is a richer account of Christianity’s own tradition in the dark aesthetics of the cross and a nuanced resource able to face the confrontations of the sublime.