House of the Shells: View of interior courtyard with Plateresque ornamentation 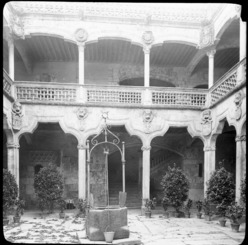 The inner court has lower arches supported by square columns with pilasters, while in the upper ones they are supported by shorter round columns in Carrara marble.

It was built from 1493 to 1517 by Rodrigo Arias de Maldonado, a knight of the Order of Santiago de Compostela and a professor in the University of Salamanca. Its most peculiar feature is the façade, mixing late Gothic and Plateresque style, decorated with more than 300 shells, symbol of the order of Santiago, as well as of the pilgrims performing the Way of St. James. On the façade are also the coat of arms of the Catholic Kings. The entrance portal has the coat of arms of the Maldonado family, while in the architrave are dolphins, a Renaissance symbol of love, and vegetal elements. The inner courtyard has a double arcade. It houses a public library today.