Scotland's Age of Reckoning: British Union and Enlightenment for a Covenanted People 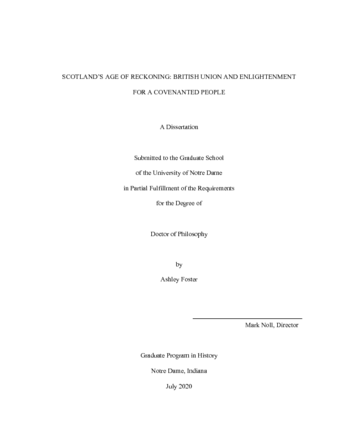 In 1742, the parish of Cambuslang located outside of Glasgow, Scotland experienced a religious revival that brought tens of thousands of men and women to the region in search of God, community, or respite from the routine of daily living. What they found was a movement at the crossroads of Scottish practices and Anglo-British networks. Hence, the revival, occurring thirty-five years after the 1707 Act of Union, provides an excellent entry point for exploring the tensions arising in the first generations of post-Union Scots who had to navigate the push and pull of eighteenth-century imperial Britain. Records from the revival are also ideal for examining lay Scots’ relationship to the current Enlightenment culture of inquiry, which hoped to distance Europe from a world of warring confessions and align it with far-flung empires. This Enlightenment movement experienced alongside an infant British state strained narratives Scots told about themselves, their communities, and the realm of the former Scottish kingdom. Out of this existential challenge from multiple directions arose a crisis of identity or what this study terms an Age of Reckoning.

This dissertation begins its study of how lay presbyterian Scots imagined themselves in the early age of Britain and Enlightenment by analyzing a collection of one hundred and eight spiritual testimonies gathered by Cambuslang’s minister in the 1740s. These accounts, when placed alongside sermons, philosophical treatises, session rolls, and Westminster legislation, disclosed more than just reactions to current religious awakenings; they revealed social actors engaging with considerable flexibility their relationships on earth and with the divine. The revival, as both a transatlantic British and particular Scottish event, an empirical and skeptical phenomenon, an enthusiastic and rational enterprise, a covenant fulfillment and covenant break, manifested the complexity of relationships that contemporaries experienced. It reflected the process of how our subjects became eighteenth-century Britons, people who embraced particular Scottish frameworks to become imperial members.