Palazzo Bolognini: Main facade with some of the sculpted heads 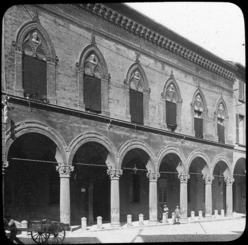 Begun in 1521 to the plans of Andrea Formigine (Andrea di Pietro Machesi, known as Il Formigine). It owes its uniqueness to the 177 heads that decorate the façade. The stone heads are attributed to Alfonso Lombardi and Nicola da Volterra. It was known for its art and music salon (casino) in the early 19th century which included the poet Giacomo Leopardi. The facade to the west (number 18) is known as the Palazzo Isolani (not to be confused with Casa Isolani, which runs behind it), or “another” Palazzo Bolognini; the style mixes Bolognese Gothic elements and Tuscan Renaissance. The building dates from 1451-1455 by Pagno Portigiani Lapo of Fiesole.