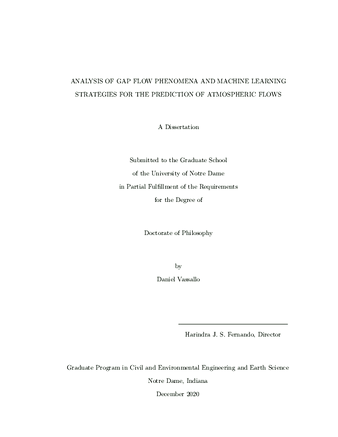 Meteorological flows are difficult to predict due to their extreme complexity and non-linearity. Current numerical weather models are primarily equipped for prediction of less capricious meso and synoptic-scale phenomena. Modeling of microscale phenomena, particularly in complex terrain, remains a pain point for the modeling community.

This thesis attempts to shed light on multiple questions related to environmental physics and modeling. The first investigation focuses on the effects of stratification on microscale gap flow observed during the Perdigão campaign. Modified forms of non-dimensional mountain height G are proposed to account for real-world atmospheric variability, and the results are discussed in terms of a gap-averaged value Gc. The nature of gap flow is highly dependent on Gc, wherein a nearly neutral flow regime (Gc < 1), a transitional mountain wave regime (Gc ~ O(1)), and a gap-jetting regime (Gc > O(1)) are identified. The findings suggest that microscale gaps, while having only a minor effect on the surrounding flow field during nearly neutral time periods, are highly influential as stratification increases and buoyancy becomes a main driver of the flow.

The next investigation explores the effects of physics-informed feature engineering when utilizing an artificial neural network for vertical extrapolation of wind speeds.

A similar question is posed in the third investigation, but for wind speed forecasting. A random forest model is used to predict the forecasting error from a bias-corrected autoregressive integrated moving average (ARIMA) model. Multiple meteorological variables are used as inputs, and variables conveying information about atmospheric stability, turbulence, and inertia are all found to be useful in dealing with non-linear error prediction. The developed model is shown to improve upon both the bias-corrected ARIMA and persistence models.

Finally, a study is performed which investigates optimal machine learning strategies for wind speed forecasting. Three sets of modeling strategies are analyzed, suggesting that target variable differencing and direct forecasting are more accurate and robust strategies for multi-step wind speed forecasting. The model is shown to improve as up to 8 equivalent years of training data is added, although such improvement may be negated by changing environmental flow patterns.