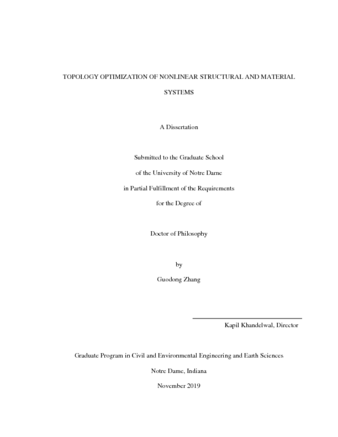 Designing structures and metamaterials that can withstand large deformations while remaining fully operational are important in many engineering applications, e.g. compliant mechanisms and energy absorbing systems. In addition, the underlying constituent material behavior may also be inelastic, which is especially the case for design objectives such as energy absorption. Thus, computational design frameworks that can incorporate both geometric and material nonlinearities are needed for designing next generation of complex nonlinear systems.

This dissertation proposes novel frameworks for structural design under finite deformations based on density-based topology optimization. In particular, challenging issues such as mesh distortion and incompressible material interpolation are successfully addressed. Mesh distortion under finite deformations is handled by an adaptive linear energy interpolation scheme wherein linear energy is adaptively interpolated in the system until the convergence of finite element analysis is achieved. Hence, the completion of optimization iterations is ensured. In addition, since most of the materials that can undergo large deformations exhibit volume incompressibility, the incorporation of this constraint is important. Thus, appropriate incompressible material parameterizations by density are needed that can steer the optimizer towards optimized discrete topologies. To this end, this dissertation proposes an interpolation scheme for incompressible materials that is integrated with advanced finite elements based on mixed u/p and F-bar formulations to address volumetric locking. Moreover, as materials may behave inelastically under large deformations, novel frameworks are also developed to incorporate path-dependent (inelastic) constitutive models. The proposed computational design frameworks are used to explore the finite deformation stiffness and compliant mechanisms designs as well as energy absorbing structural designs.