Roman ruins at Guelma: Detail of the ruins of the baths 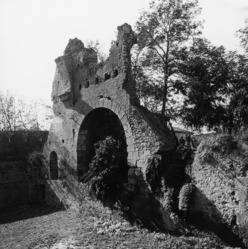 The Roman named settlement of Calama, part of the Roman province of Numidia, later became a proconsular province and bishopric of St. Possidius, the biographer of St. Augustine. Roman ruins include baths and a theater. The theater was completely rebuilt in the 20th century, supervised by Stéphane Gsell (1864-1932), and saw its first modern performance in May 1908. The baths were partially dismantled and used for fortification by the Byzantines.