Jakobskirche: View into nave from narthex, pulpit and altar visible in nave 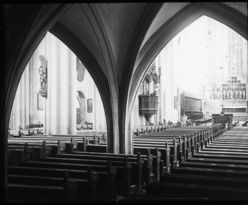 Jakobskirche was originally on the pilgrimage route to Santiago de Compostela. In 1266 a chapel of the Holy Blood was consecrated. Rothenburg became an independent parish in 1286, and the church was subsequently rebuilt from east to west, starting with the east choir (ca. 1310), probably an extension of the Romanesque nave. In 1373 work began on the new nave. The architects Conrad Eschenbach of Nuremberg (1377), masters Heinrich and Peter (1383-1384) and Master Staudigel of Nuremberg (1389) worked on the project (completed ca. 1436). The building of the west choir (1453-ca. 1467), constructed over the chapel of the Holy Blood and subsequently replacing its function, was directed by Niclas Eseler the elder and (from 1468) his son, Niclas Eseler the younger. In 1479 the polygonal narthex of the Ehetür was built; the roof was completed in 1486 and the northern spire in 1487. During the 15th century the church was richly furnished. At the Reformation (1556) it became the Protestant (Lutheran) parish church of the town.