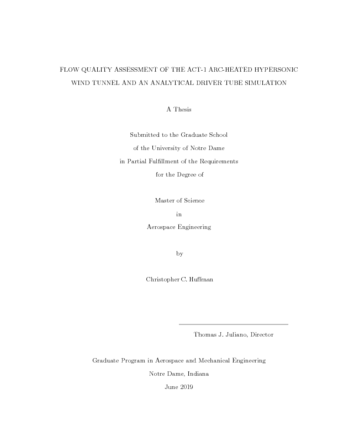 The Notre Dame arc-heated hypersonic wind tunnel, ACT-1, has been in use for four years and its flow has only been cursorily characterized. The flow of ACT-1 is characterized in greater depth in this work by its Mach-number variation both axially and azimuthally. The testing is performed at two stagnation pressures and with both the Mach-4.5 and Mach-6 nozzles. A two-phase flow problem is encountered in these tests and corrected for by a factor based on the fraction of carbon dioxide condensate. In addition to Mach-number variation, power spectra are examined. A second undertaking of the thesis is an analytical model of a shock tube which is used to benchmark against a numerical simulation. The treatment of interactions between flow structures is discussed, e.g. shock-shock and shock-contact surface interactions. The results are displayed as comparisons of flow properties at the farthest downstream position in the tube (i.e. a notional inlet to a Ludwieg tube’s nozzle) and overall mass fluctuation throughout the time of simulation.