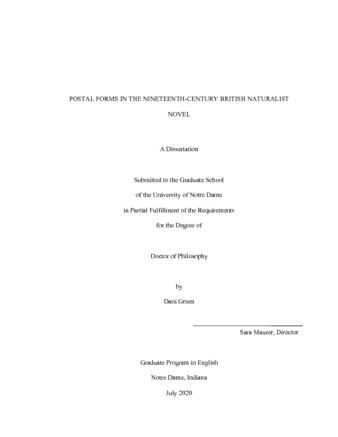 This dissertation explores how the British post office and the British naturalist novel handle the circulation of personal objects—letters and characters—in impersonal ways, with the postal system functioning as a useful analogy for understanding the narrative habits of British naturalism. With the adoption of uniform postage, the increased use of envelopes, the reversal of payment remittance from recipient to sender, the introduction of letter boxes and pillar boxes, and the subsumption of Britain into one postal zone, postal reforms predicated the postal system’s efficacy on methods of handling that minimized human contact, thereby naturalizing an impersonal way of handling human subjectivity in circulation in writing. I argue that British naturalism makes this way of thinking part of its narrative conventions in order to bring it into formal conversations about the Victorian novel and scholarship on American and French literary naturalism, but also to untether it from realism and complicate critical impulses to genrefy with a formal approach.

Drawing on what Megan Ward has recently theorized as “technological formalism,” I treat the post office not as a context but as a technology whose structure helps us interpret the naturalist novel’s place in British literary history. Naturalist novels of the 1870s–90s foster rhetorical distance between narrator, characters, and readers that contrasts the correspondence we see among them in novels of the eighteenth and early-nineteenth centuries, modeling how to understand systems by taking a step back from the particular in order to comprehend wholes. The naturalist novel’s impersonal orientation toward its content is a formalism it shares with the reformed post office’s modes of handling personal content, and I examine three specific types of postal forms—enveloped subjectivity, postal postures, and juxtaposition—not to define or prop up British naturalism, but to observe habits among three naturalist writers. Exploring character in Thomas Hardy, narrator in George Gissing, and narrative pathways in George Moore, I describe the forms that naturalism takes in its efforts to reject particularization as the only way to care in a system overwhelmed by the personal.