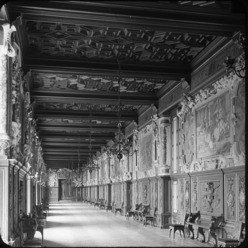 Built between 1528 and 1530, it measures about 60 meters long and 6 meters wide. The Gallery links the apartments of Francis to the Chapel of the Trinity. The decoration is by Rosso Fiorentino, 1535-1537.