Mitla: Distant context view of one of the palace complexes 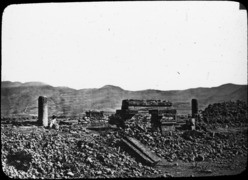 Similar discipline and elaboration occur in the designs of the palaces (Church Group, Column Group and Arroyo Group).