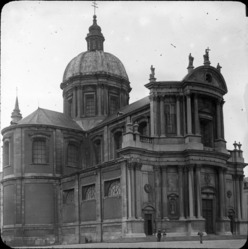 Dedicated to Albinus (Aubin) of Angers. The only cathedral in Belgium in the academic Late Baroque style, built to designs of the Ticinese architect Gaetano Matteo Pisoni. It was the only church built in the Low Countries as a cathedral after 1559, when most of the dioceses of the Netherlands were reorganized. The church has a Latin cross plan with apsidal-ended transepts and tribune, a high dome over the crossing and a convex projection to the façade; the interior, however, already displays a transition to Neo-classicism.