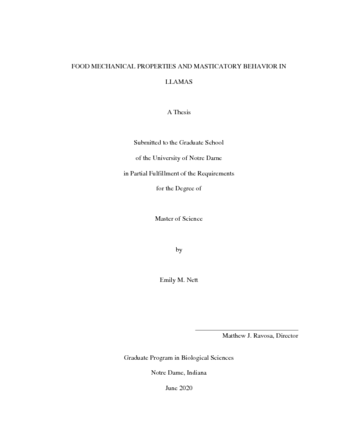 Mammals typically process foods in the oral cavity much more extensively than other vertebrates. Dental morphology, jaw-muscle activity patterns, mandibular movements, and tongue manipulation all work to facilitate oral fragmentation of dietary items. During the oral processing of mechanically challenging foods, mammals modulate mandibular movements and bite forces via the recruitment of greater jaw-adductor muscle forces and/or protracted biting and chewing. As jaw-loading patterns are influenced by the magnitude, frequency, and duration of muscular forces during routine feeding behaviors, relatively larger jaws are thought to be more characteristic of mammals that experience higher masticatory loads due to the processing of mechanically challenging foods. The ease of food fracture during postcanine biting and chewing is mainly determined by the extent to which a food item is stiff and/or tough. Such foods have been associated with increased loading magnitude and greater amounts of cyclical loading (i.e., chewing duration). Dietary properties are thought to modulate cyclical loading through changes in chewing frequency and chewing investment. On the other hand, chewing frequency has been found to be independent of dietary properties in rabbits and primates. In both cases, however little evidence exists regarding the influence of dietary properties on these parameters in a broad range of mammals. Here, we assessed chewing behavior in 7 adult llamas processing foods with a wide range of mechanical properties (grain, hay, carrots, and dried corn). Each subject was filmed at 60 frames/second, with video slowed for frame-by-frame computer analysis to obtain feeding bout length and the number of chewing cycles for each food type. These parameters were used to calculate chewing frequency (chews/s), chewing investment (chews/g), and chewing duration (s/g). Chewing frequency was unrelated to food mechanical properties, while chewing investment and chewing duration were related to both dietary stiffness and toughness. Therefore, cyclical loading is positively influenced by stiff and tough foods. This suggests that variation in jaw morphology in extinct and extant mammals appears to be positively related to dietary stiffness and toughness, which requires a greater chewing investment and increased chewing duration.