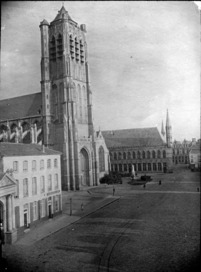 Although it was completely rebuilt in a unified style after World War I, St Martin remains a good example of 13th-century Gothic architecture in the Scheldt Valley. The plan of St Martin consists of a six-bay nave preceded by a projecting tower. The transept arms are unequal, the north with two aisleless bays while the south has three, with a western aisle. It houses the tombs of Jansenius, bishop of Ypres and father of the religious movement known as Jansenism, and of Robert of Bethune, nicknamed “The Lion of Flanders”, who was Count of Nevers (1273-1322) and Count of Flanders (1305–1322). Shelled in May 1915. Restored by J. Coomans.