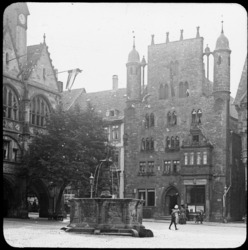 A late-Gothic 14th century patrician house, which today houses the tourist information office. The origin of the name is unknown. It might refer to a synagogue which was mentioned in a document written in 1385, as the house stands at the corner of a small street called “Judenstrasse” (Jews’ Street). In the late Middle Ages, however, the Jews of Hildesheim lived in a quarter called Lappenberg, about one kilometer away from the Market Place. There was also a painted gable of jousting knights that might be associated with the Knights Templar. The Tempelhaus was remodelled several times, and in the 16th century the two round towers were added. In 1591, a Renaissance bay window with colorful stone carvings was added to the Temple House. The carvings include the crest of the Von Harlessem family and the parable of the prodigal son. At the beginning of the war, the bay window was dismantled and hidden in a cellar. The house suffered some damage during the Second World War but was restored and inaugurated in 1950 after the bay window had been added again.