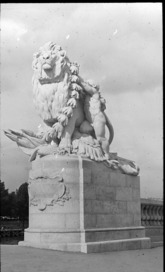 Collectively designed by Résal and Alby, the engineers, and Cassien-Bernard and Cousin, the architects, for the 1900 World Exhibition. The figures of Pegasus have recently been re-gilded to their original splendor. Pont Alexandre III is an arch bridge that spans the Seine, connecting the Champs-Élysées quarter and the Invalides and Eiffel Tower Quarter of Paris. The bridge, with its exuberant Art Nouveau lamps, cherubs, nymphs and winged horses at either end, was built between 1896 and 1900. It was named after Tsar Alexander III who had concluded the Franco-Russian Alliance in 1892. It was Alexander’s son Nicholas II who laid the foundation stone in October 1896. The style of the bridge reflects that of the Grand Palais, to which it leads on the right bank. The construction of the bridge is a marvel of 19th century engineering, consisting of a 6m high single span steel arch. The design was subject to strict controls that prevented the bridge from obscuring the view of the Champs-Élysées or the Invalides. Of the many sculptors involved, Jules Dalou, Emmanuel Frémiet, and Pierre Granet are the best known.