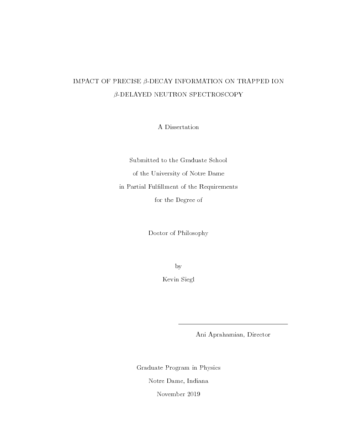 Beta-delayed neutron (βn) emission is relevant to nuclear reactor kinetics, nuclear astrophysics, and general nuclear structure. In nuclear reactors, βn emitted by fission products, while a small fraction fraction of the neutron production, can have significantly longer timescales. This effects the responsiveness of the reactor and decay-heat calculations. In nuclear astrophysics, βn emission affects the abundances produced by the rapid neutron capture process (r-process). The r-process is responsible for the formation of approximately half of all nuclei heavier than iron. The r-process path is determined by astrophysical conditions, beta-decay rates, neutron capture cross-sections and other nuclear properties. During the relaxation to stability βn emission contributes to the shape of the final abundance, both by populating lower mass numbers and, depending on the neutron energy, adding to the neutron flux at late times. Due to the difficulty in determining the probability of neutron emission from a decay (Pn) and the emitted neutron energy it is one of the least studied aspects of the decay of neutron rich nuclei. By confining precursor ions to a small volume in the center of a linear radio frequency Paul trap, recoil momentum determined from time of flight of the decay product was used to determine both Pn and the neutron energy spectrum. This method is not subject to the low efficiency of direct neutron detection or neutron backgrounds. The use of recoil momentum requires an understanding of the behavior of the recoiling ions in the trap. This introduces a dependence on aspects of the decay which for many neutron-rich nuclei are not well known, including absolute beta-branching ratios. A β-decay study of the calibration nucleus 134Sb was performed, and in combination with a comprehensive simulation of the trap, the magnitude of the dependence of the recoil-ion technique on specific decay information is be determined.