Faiths and Fortune: Religion and the Professional Middle Class in Urban China 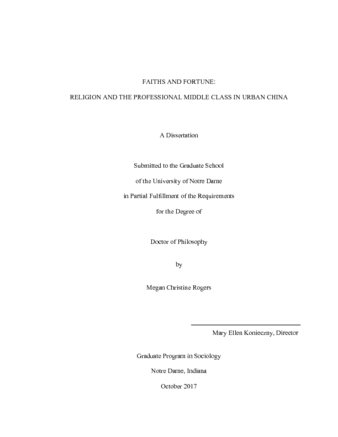 My research examines how one portion of the Chinese population—the growing professional middle class—is engaging with religious practices and asks how they are using these practices to make sense of their success and their place in both their country and global society. How can we explain the fact that a rapidly modernizing society that so recently underwent forced secularization is now awash with religious activity even in the face of continued governmental control of religion? What does this growth of religion actually look like in people’s everyday lives, and how do they use these religious practices, beliefs, and identities to make meaning and build community?

This project uses ethnography and in-depth interviews to answer these questions by examining the religious practices in which educated Buddhists, Protestants, and non-religious professionals engage. Drawing on critiques of the standard sociological theories and ways of conceptualizing and measuring of religion, this project uses the lens of religious practice, based on the theoretical work of Martin Riesebrodt (2010) and Adam Yuet Chau (2011a), to demonstrate how educated professionals’ social position orients them towards religion in a distinctly rationalized and individualistic way that transcends established religious lines. I find that they engage with religion in similar ways regardless of their religious tradition: religion is, in short, something to be studied, and this study is perceived as necessary to avoid being a surface or “superstitious” practitioner, against whom they build strong symbolic boundaries. With an emphasis on rationality and science, these educated practitioners delegitimize and distance themselves from the types of emotional, “uncultured,” and superstitious practices that constitute a central component of popular Chinese religion and popular forms of religious traditions such as Christianity. In doing so, they are exerting their moral authority as educated and cultured persons of high quality to delimit appropriate religiousness, a process that serves to draw and reinforce class boundaries as well as religious ones. These efforts also inadvertently support the state’s rhetoric on the appropriate forms and location of religion as well as what it means to be a rational and modern person of high quality.